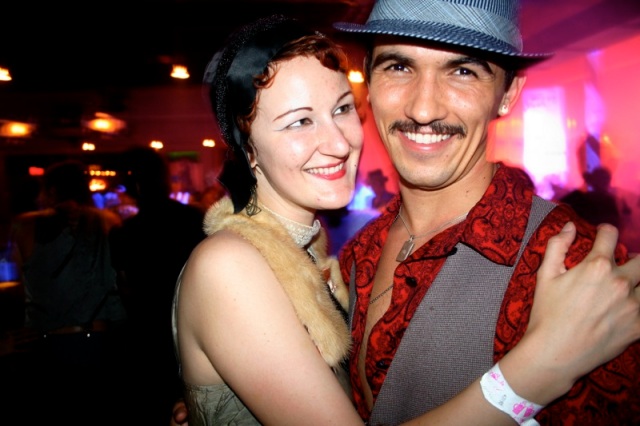 Guilherme will be leaving back for Brazil in just a few short days, so I’m trying to cram as much fun dances, dinners and alone time with him as humanly possible. He and I had a fantastic time at Gadjo Disko on Saturday! Gadjo Disko is an Eastern European block party with manic dancing, fresh fruit, strippers, costumes, bubbles, glitter and lots and lots of fun. I’ve gone as a living doll, a golden sunbeam, and flapper vamp before. Gadjo Disko is put on, in part, by the ever-fabulous Angeliska, whose use of antlers and sheer clothings never cease to amaze me!

My outfit wasn’t as elaborate as previous Diskos, but I was satisfied to give my crumbling dress another go-around!

I think the secret to really dynamic and unique vintage is the ability of a garment to bend and transform through all spectrums. This gown has gone from gala to graveyard, from supping to dancing gracefully.

I bought this dress when I lived in Eugene, Oregon in 2005. I used to go to this fabulous store called Nobody’s Baby and befriended all of the shop girls. I found this white 1940s gown in a trunk at the back of the store, and it was still in pattern pieces. I bought it for $7, stitched up the bodice and wore it to several events before I decided to dye it green and embroider down the front of it.

Left: This is what it looked like just stitched together:

Right: This is me on Day of the Dead last year. I’ve dyed the gown green and added my father’s epitaph in embroidery down the middle. 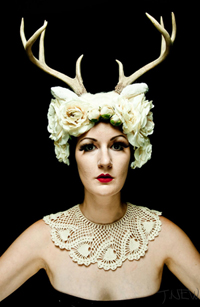