This weekend, I designed an outfit for a fashion show called “Dreaming in Color,” put on by Vitamin Water and Coco Coquette, a local wig & makeup shop known for sparkle and customized, amazing wigs.

The assignment was to design a look around a flavor of Vitamin Water, and I chose Energy, a sunshine school bus yellow and gold. I imagined my model suspended in a gilded cage of a hoop skirt, recalling an era of enormous, dramatic, impractical clothing of the late 1800s. Stripped bare to the golden bars, the model stands isolated inside of the contraption, yet is on display for all to see.

First things first: I used fabric stiffener to prepare 2 yards of gold lame and metallic gold fabric. Then I traced hundreds of hearts on the fabric with sharpie and cut them out, one by one. This was finished over several days of watching MST3K, Carnivale, and waiting in doctor’s offices.
The hoop skirt was borne out of hardware supplies and a thrift store belt. The white hoop part is actually sprinkler tubing, connected by brass hardware and metal crimps. Long strands of threaded bolt were drilled through the tubes to hold up the dress, secured by washers and bolts. The hoops sit exactly eight inches from one another. I found three leather belts at Savers, and cut them up to create the harness of the skirt. Reese drilled the holes for placement while the belt was on my body – just inches from my ribcage. Yikes!
I played with many a Tim Bird while working at the toy store, and thought to dismantle one for use in this project. You’ve seen these, yes? It’s a plastic bird that flaps when the dial under his tail is wound – also called an ornithopter! Little Tim Bird was dismantled, his wings and tail replicated in gold fabric, and body gilded.
Heavy with fabric and glue after his transformation, birdie still flapped, but could not fly. My original scheme was to have the model pluck birdie off of his chestpiece and fly birdie over the audience.

I wish there was video that demonstrated how the skirt swayed – it was like a bell! Speaking of behemoth projects – I almost pulled a Henry Ford with this one, as we barely got it out of the house. I called a good friend with a truck and paid him in Jameson to transport the hoopskirt to the show. 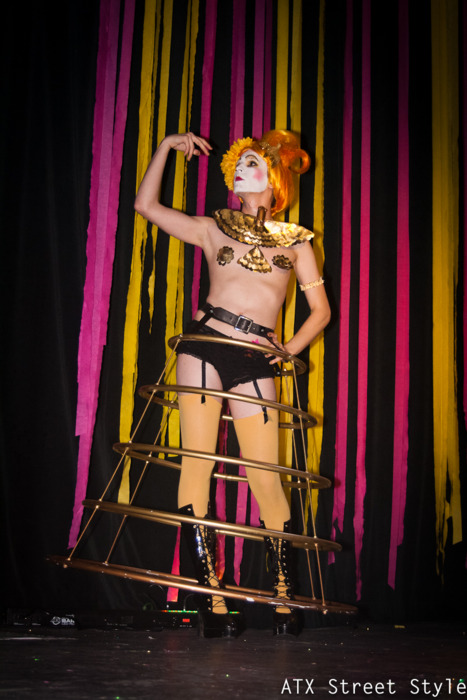 Drew in full regalia. There’s something unseemly naughty about a man wearing pasties, no!? Photo by ATX Street Style 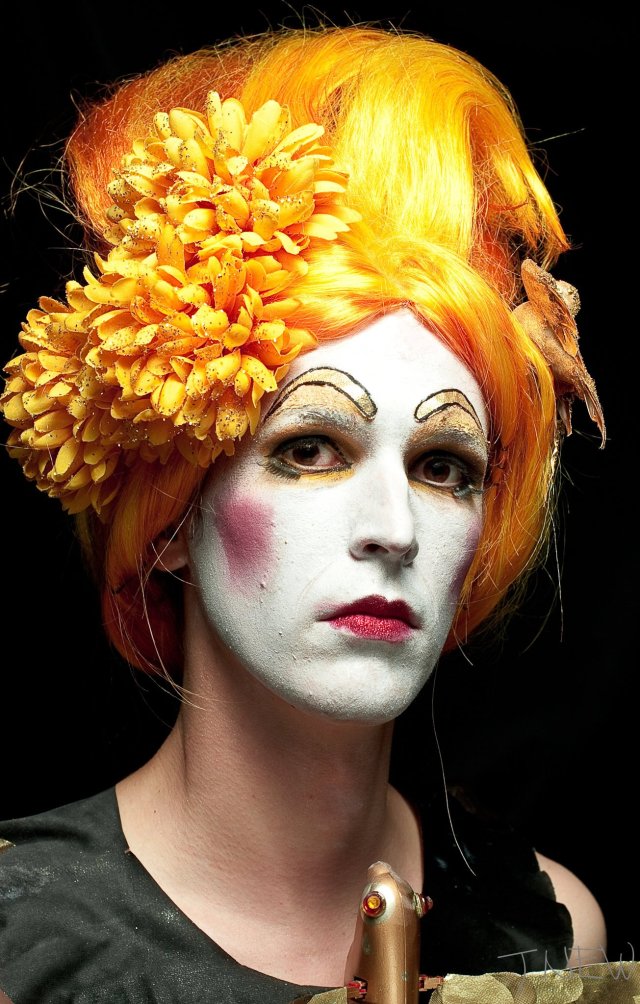 I did Drew’s makeup, right down to the gold lame eyebrows. I was inspired by Prince Poppycock and French Mimes. Photo by Jeremiah Newton

Drew is not a dancer by trade, but a magician! He constructed the fabric “wing” and created a levitating bird spectacle on stage! Photo by Keep Austin Stylish

The dance went a bit like this: he takes stroll through the garden (set to Sunny Afternoon by The Kinks) and befriends a tiny yellow bird. The bird floats in the cloth wing, annoying him. He rips the bird’s head off and glitter showers the stage. Photo by John Leach.

Designer and model together! Photo by Fun Loving Photos.
This was a new level for me, in terms of design. I have no skills or facilities when it comes to sewing, but I was still able to fabricate an outfit that was dynamic & full of twists and turns. Hope you like it, and would love to hear feedback. I am planning on adapting this for my Halloween costume, so it won’t be the last you see of the Gilded Cage!

2 thoughts on “Dreaming In Color”